Wednesday’s edition of SportBild talks about the Red Devils and the Champions League winners’ interest in the Bayer Leverkusen star, but there’s no mention of Pep Guardiola’s side.

It’s claimed Bayern Munich have ‘shown interest’ in the attacking midfielder, while the likes of Ole Gunnar Solskjaer’s side and the Merseyside club, along with Real Madrid and Barcelona, are ‘keen’ on the Germany international.

The 20-year-old impressed last season by scoring 17 goals in the league and has managed four goals and two assists in 16 league appearances for Leverkusen this campaign. 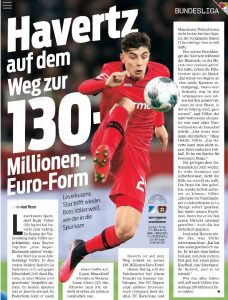 “Kai has an extraordinary gift. He is good with his left foot, good with his right foot, has a good head, an outstanding technique, and he is fast,” Völler was quoted as saying by SportBild.

The newspaper adds Völler has made it clear that any potential suitors interested in Havertz must pay €130m to sign him from Bayer Leverkusen.

Whether the likes of Liverpool, Manchester United or any other club will meet the Bundesliga side’s demands remains to be seen.