Home Europe Manchester United ‘about to advance’ and ‘put cards on table’ to make...
SHARE

On Thursday we covered claims from Portugal and explained it feels like something may happen with the Bruno Fernandes situation soon.

It’d all gone relatively quiet in the major Portuguese sport newspapers for a few days. Correio da Manhã were still sending out claims daily, or almost daily, yet the rest had calmed down a little.

Then the others came back in and the language started to change. The word ‘accelerate’ has clearly been pushed out, because several versions of the story contained it repeatedly.

Manchester United were front and centre, with Tottenham also in the picture. It’s been made clear multiple times in Portugal that Spurs interest, and ability to pay for the signing, is based upon a Christian Eriksen sale, and with that not looking imminent, or even odds-on at this stage, it presents a problem.

Friday’s edition of A Bola says that’s why the club sent out a message saying they’ve pulled back from the race, and it’s made clear their interest remains but there’s nothing to be done whilst Eriksen remains.

Things are a little different up at Old Trafford.

Manchester United are ‘about to advance’ and ‘put their cards on the table’. A Bola states the club have been in pole position ‘since always’, and they claim agent Miguel Pinho met both the Red Devils and Spurs this week.

At Sporting they’ve ‘learned’ United are the most interested, and the only place they could really learn this from is Pinho. The club are ‘about to advance with a proposal’, and there’s something which makes these claims feel more genuine than at other times… the price. 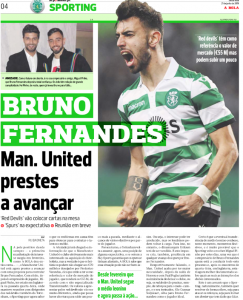 Rather than claiming the Premier League club will offer €70m or a package worth up to €80m, it’s stated they’re looking more at something around €55m with perhaps some bonuses on top.

However, the Paul Pogba situation could still be crucial, and even if talks advance there may be a hold up to see what happens with the Frenchman.

Manchester United don’t need money from Pogba’s sale for the purchase, but perhaps they need a space in the team.