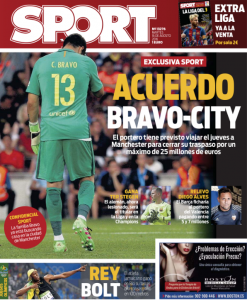 Catalan newspaper Sport have Claudio Bravo to Manchester City plastered all over their front page on Tuesday, claiming an exclusive that there’s agreement for the transfer.

It’s not such a breaking story, because Sport themselves revealed it online on Monday evening, which would suggest they were under some pressure to publish the story, if they didn’t feel they could wait for today’s newspaper.

The gist is that Bravo’s representatives had discussions with Barcelona and found out he was second fiddle in the club’s consciousness to Marc-Andre Ter Stegen.

The German himself has been kicking and screaming and managed to get a reassurance he’ll play Champions League games, which hasn’t left Bravo happy.

Therefore, Barcelona are happy to accept around €25m from Manchester City, and Bravo is set to travel on Thursday.

Why Thursday and not NOW? Well, Ter Stegen is injured, and Barcelona play the second leg of the Spanish Super Cup against Sevilla on Wednesday. Bravo will hope he doesn’t come out of it injured himself.

Barcelona are also looking at bringing someone in, with Valencia’s Diego Alves the favourite right now.

Ter Stegen hasn’t exactly been faultless for Barcelona, and a couple of high profile mistakes this season, which would follow a pattern of similar before, and Barcelona may well have regrets.