He also revealed that other clubs interested in the duo and the La Liga winners must do everything right to secure their signatures.

The last page of Mundo Deportivo questions whether the Blaugrana are on the right track, as Manchester City and Paris Saint-Germain are also interested in the Netherlands internationals.

In Nyon, none of the Catalan club’s sporting leaders were present, while City director of football Txiki Begiristain and the French capital club’s sports coordinator, Maxwell, were there. It’s claimed they both held talks with Overmars.

The Premier League winners’ chief ‘spoke a lot’ with his Eredivisie counterpart as Pep Guardiola’s side ‘want to sign’ both De Ligt and De Jong.

The report mentions no deal was negotiated during Begiristain’s meeting with the Dutch club’s sporting director, but things could advance for the two stars, ‘if things are done well’. 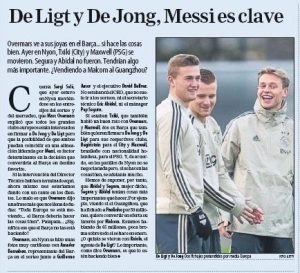 The advantage for Barca is both the defender and the midfielder want to play alongside Lionel Messi, but they cannot neglect City and PSG, especially considering the two clubs have better financial muscle.

Forward admits he regrets leaving West Ham – Says he has...