Lionel Messi has a contract with Barcelona until 2021 and earlier reports suggested a clause in his contract would allow him leave Camp Nou as a free agent this summer.

The deadline to exercise that clause expired on May 31st and this has been confirmed by the player’s entourage to AS.

It’s also claimed there was interest from Inter Milan and Manchester City in the forward, who will turn 33 later this month.

The Nerazzurri and the Premier League winners were ‘waiting for a signal’ from the star to make an approach for his signing on a free transfer. Unfortunately for them, the signal ‘never came’.

AS presents this report as their original information and they explain Messi never considered leaving the La Liga winners, despite experiencing tense moments at the club in recent months.

Those in charge at Barca hope Messi’s decision to continue could be a gesture from him to sit down for renewal talk so that he can end his playing career with the Spanish giants. 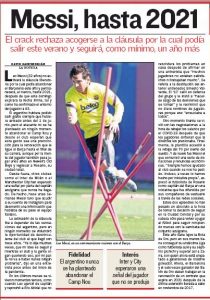 However, AS state the South American’s idea would be to ‘play a few years at Newell’s Old Boys and return to Rosario, his hometown’.

Messi will be at Barcelona until at least 2021 and should he decide to leave them, he’s more likely to return to Argentina than joining either of Inter or Pep Guardiola’s side.