Manchester City defender Nicolas Otamendi is hoping to rejoin Valencia this summer, but a deal could prove challenging to get over the line.

The Argentine has found himself increasingly out of the picture at the Etihad under Pep Guardiola, a situation that has not been helped by the arrival of Nathan Aké.

With City expected to move for another centre back on top of the Dutchman, that could leave Otamendi far down the pecking order and thus a move away has been heavily mooted.

Super Deporte cover his situation today and state that Valencia would very much be interested in a reunion, but there are several complications to overcome first.

They explain that Otamendi is keen for his next move to have an ‘emotional basis’ and so he would give ‘special treatment’ to Valencia ahead of the likes of Fiorentina, who have already made a ‘firm proposal’.

In other words, Valencia will be given ‘priority’, but there is a limit to that, and various obstacles are standing in the La Liga side’s way.

One of those is Otamendi’s passport. He counts as a non-EU player in Spain and Valencia already have three in their squad.

They are planning on opening one of those up when Gabriel Paulista gets his Spanish nationality, but the plan was to give that space to Manchester City midfielder Yangel Herrera. 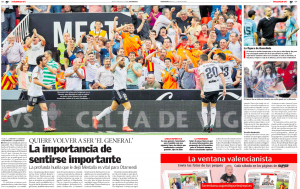 The second problem is Otamendi’s wages. He’s on a big pay packet at the Etihad and while he is willing to take a cut – because he wants to feel important again – the suggestion is that he still may be out of Valencia’s reach.

Finally, there is Manchester City’s asking price. While they are happy to sell Otamendi, it’s believed they will be asking for €8-10m for him, a price that is ‘not easy’ for Valencia to reach.

Nonetheless, the interest is there and while the operation is considered ‘very difficult’, Otamendi ‘hopes’ that he can return to his former club at some point.