Back in May, a story appeared on Calciomercato in Italy that Manchester City were interested in signing Sebastiano Esposito from Inter.

As well as the Premier League champions, Paris Saint-Germain were said to be circling, but the Serie A club weren’t particularly worried about this, and it was believed he would sign a new contract keeping him at the club until 2022.

That has now been done, and the rumours have somewhat dissipated.

However, L’Equipe, in a big article on the Italy U18 international, reveal both Manchester City and Paris Saint-Germain ‘tried their luck’ this summer, with confirmation from Ugo Armanetti, a former footballer, the French side even called his dad. 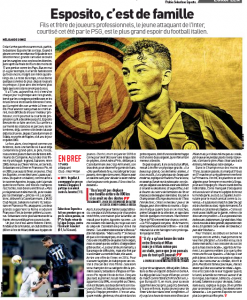 Inter then swiftly moved with the contract offer, tying him down for the next three years, and he has, so far, scored three goals in three games this season for Inter’s youth teams, as well as featuring on the bench against Barcelona in the Champions League and three times in Serie A without ever coming on.

That’s how much they trust him, so it’s no surprise Manchester City, who are all about hoovering up talent these days, were keen on acquiring him.