The Turkish newspaper say Fenerbahce have identified the Manchester City player as the man to replace Martin Skrtel following reports this week the Slovakian is edging closer to Steven Gerrard’s Rangers.

Gerrard was recently appointed Rangers boss after Graeme Murty was released and Skrtel has been strongly linked with a move to Ibrox.

Rangers will lose David Bates in the summer to Hamburg and Skrtel could be an ideal replacement for the Scottish Premiership club. If Skrtel heads to Rangers then Mangala could be targeted by the Turkish giants.

According to Amk, Fenerbahce officials will start official talks with Manchester City next month and the Turkish club are hoping they can get him for a cut-price fee. 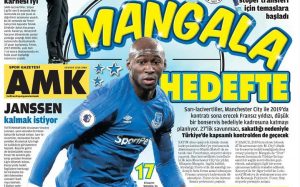 Mangala’s loan spell with Everton came to an early end due to injury and it seems he doesn’t have a future at the Etihad under Pep Guardiola.

The Turkish giants will also asses the Frenchman’s fitness before making an offer.

Mangala has just 12 months left on his contract with the Premier League champions.