Manchester City have Tottenham defender Jan Vertonghen on their list of potential targets this summer as Pep Guardiola eyes up two new centre-backs.

The centre of City’s defence has been a significant problem for them this season, with an injury to Aymeric Laporte at the beginning of the season throwing the campaign into mild chaos.

Defensive midfielder Fernandinho has spent most of the season playing there as cover, with injuries and a lack of form meaning neither Nicolas Otamendi nor John Stones have been fully trusted.

It’s a problem Guardiola is keen to fix and, according to Het Laatste Nieuws, he could have his eye on a potential cheap solution.

That is Tottenham’s Vertonghen, who is out of contract this summer and increasingly likely to leave Spurs once his deal expires.

HLN explain that Guardiola’s ‘priority’ this summer is to sign two defenders for Manchester City; a big-name and a left-footed stopgap.

The latter has to be a ‘footballing defender’ who can cover for Laporte at the back but also play at left-back if needed.

They have looked at Bayern Munich’s David Alaba as part of the talks for Leroy Sané, but that was ‘in vain’, and so they have drawn up a list of alternatives. 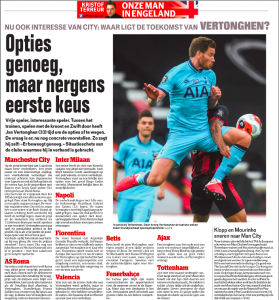 One of those is Vertonghen, who the newspaper report is an ‘option’ but ‘not yet a target’ for City, who have been gathering information on him over the last few months.

It’s explained that while his age works against him, his price (free) and his wage demands – he currently earned €75,000 a week at Tottenham – are both plus points, as is the fact he fits perfectly ‘in terms of play and mentality’.

As a free transfer, he is considered the ‘low-cost option’ for one or two years but Manchester City would first have to get rid of Stone and Otamendi, a difficult task given their high wage packets.

“They were shocked” – Midfielder reveals he turned down Chelsea, wages too low 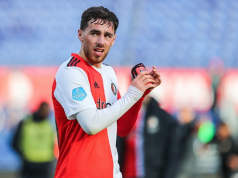 “He does catch the eye” – Leeds have been ‘in stands’ for player, Bielsa reactivates interest

“They were shocked” – Midfielder reveals he turned down Chelsea, wages...