Matheus Nunes’ potential departure from Sporting is today discussed by newspaper A Bola.

With the midfielder about to complete 100 appearances for the Lions, the outlet points out the ‘smell of farewell’ surrounding the player at this end of the season.

And when speaking of Nunes’ future, it’s nearly impossible not to mention Manchester City, who have been heavily linked to the player this year.

This time, A Bola points out that the Cityzens are ‘top of the list’ to land the 23-year-old this summer, especially because he’s only leaving Sporting for ‘a club who will fight for domestic and European titles’. 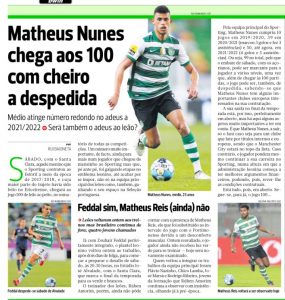 Manchester City’s interest in Nunes started being reported after they faced Sporting in the Champions League this season, especially because of Pep Guardiola’s comments about his performances.

But despite naming the Premier League side as the main contender for his signing, A Bola doesn’t seem to know how advanced this pursuit is, or even how much it would take to sign the midfielder this summer.

It feels like they just name Manchester City as the main club who could take him from Lisbon in the coming months.