Since Aymeric Laporte picked up an injury, Manchester City have been linked to defenders as if it was the middle of a transfer window.

One of the players named this weekend was Milan Skriniar, who had already been a target for many European sides during the summer.

Tuttosport has a story about it today, and although we thought they would be feeding the rumours, they actually don’t take it very seriously.

The outlet says that Inter Milan are not planning to sell the defender. Not in the next summer window, and especially not in January. 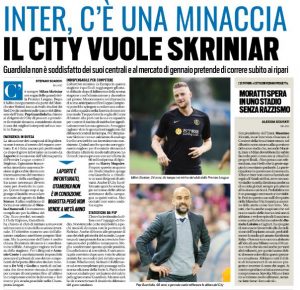 Inter Milan’s board, along with Antonio Conte, consider it’s impossible to fight head to head with Juventus if they lose any of Skriniar, Diego Godin or Stefan De Vrij.

It’s said the Nerazzurri would need too much money to replace him, so Manchester City’s attempt is expected to be ‘unsuccessful’. Just like it already was when they made contacts for the signing during the summer window.