Manchester City have opened talks for the signing of Florentino Luís from Benfica, according to Portuguese newspaper A Bola today.

After scouting the player at the Estádio da Luz, the Premier League side would have approached the Eagles to speak about the figures of a possible transaction.

A Bola claims that Manchester City are willing to pay €35m to take the 19-year-old to England now, but that’s still far from what Benfica are demanding.

The Lisbon side are using the player’s €60m release clause as a reference, and to let him go now they would like to get €50m up front plus €10m in performance bonuses. 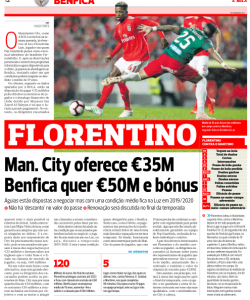 Another demand made by Benfica is that the player stays in Portugal for one more year, to play the 2019/20 season for the Eagles. But in that case, they would accept Manchester City to pay the amount in several installments.

Manchester City’s reaction to the demands is still not revealed. They know that this second option would work more like a reservation for the player, while he would have more time to develop in Portugal, and have more playing time than he would have at the Premier League side.

In case Pep Guardiola’s side don’t move now, Benfica are set to offer the youngster a new contract, which would raise his release clause to €120m.