On Saturday we covered claims from the Catalan media who stated Barcelona’s Nelson Semedo is getting closer to signing for Manchester City.

Despite earlier reports of a move to Juventus, it was stated Pep Guardiola’s side was now the likelier destination, with Semedo seeing signing for City as his priority option.

They say that despite reports otherwise, Manchester City aren’t especially keen. The player has been offered to them, and there’s been talks at an ’embryonic’ stage, but Marca insist it’s nothing more serious than that.

With the suggestion that Jorge Mendes is behind everything, the Spanish newspaper claims Semedo was also offered to City in the January window, and they didn’t take the bait then. 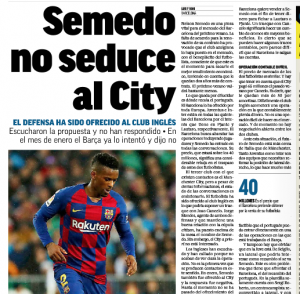 The Premier League club have listened to the approaches, but aren’t jumping at the chance to sign Semedo, and they believe the operation of including Joao Cancelo in a swap deal would be a complicated one when it comes to the accounts, and then subsequent impact on FFP.