Three days ago, we carried a report from Gazzetta dello Sport, who explained Manchester City have approached Lautaro Martínez’s entourage, sending more than one signal.

Barcelona are also believed to be heavily interested in landing the Inter Milan forward.

Sport on Thursday claims Pep Guardiola’s side are ‘still there’ in the race for the 22-year-old, along with the La Liga winners.

Barcelona already know about the offer tabled by the English champions, to both Inter and the Argentina international, is ‘much better’ than what the Blaugrana are ready to offer.

The newspaper states City could pay the player’s full release clause (€111m valid between July 1st-15th) and they also would be in a position to offer Martínez a net annual salary of more than €10m.

Although the Premier League winners are in a position to offer a better economic deal to both Inter and Martínez, Sport reckons the South American will decide his future based on sporting reasons. 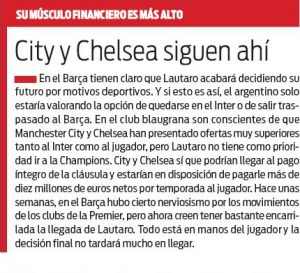 Based on this, Barcelona are of the belief the attacker would rather continue at Inter, if he fails to make a switch to the Camp Nou.

For now, everything is in Martínez’s hands and the report adds it won’t be long before he makes a final decision on his future.