Manchester City are in the market for a new striker as Sergio Agüero may leave after his contract expires at the end of this season.

Borussia Dortmund star Erling Haaland has emerged as one of the main targets for the Citizens.

City’s interest in the 20-year-old and the Bundesliga side’s stance on him is discussed in today’s edition of Sport.

It’s claimed the leaders of BVB leaked they are looking for around €200m for the Norway international, while other outlets recently stated Dortmund want €180m for the striker.

The aforementioned figures for the attacker could be valid in the normal market.

However, finances in football are impacted by the global pandemic and the newspaper adds his market price would be around €150m. It’ll be necessary to see whether this figure would be including bonuses or just a fixed fee.

Only a handful of clubs have access to such a big budget. Although, Pep Guardiola’s side will start with an ‘advantage’ by having ‘enough cash’ for the big money signing.

Real Madrid are also interested in Haaland and having not made any signings last summer, they will also be able to complete such an operation. However, their priority is to take Paris Saint-Germain’s Kylian Mbappé.

Barcelona have received all the information regarding the former Molde man and have confirmed to Haaland’s entourage that he’s their first-choice striker target.

Ronald Koeman’s side will first need to sell one or two of their main players and also lower the salary budget to accommodate the Dortmund frontman in their squad.

Haaland’s €75m release clause will come into effect in 2022 and the German club’s desire is to retain him until the end of the season. They also hope to remove the buyout clause by offering an extension. According to Sport, this is highly unlikely to happen. 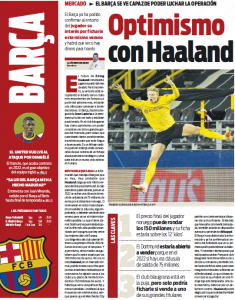 Therefore, Dortmund will try to get as much as possible from Haaland’s sale as he is ‘very, very likely’ to leave his current employer in the summer.

City’s financial muscle helps them to start with an advantage in the chase for the player.

At the moment, Haaland’s environment are ‘gathering’ the interest of most top clubs and from April, they will ‘begin making decisions’.