The Dutch media inevitably have endless takes on Virgil van Dijk’s current injury situation, and for De Telegraaf it’s seen a wider look at officiating and the use of VAR in English football.

In the newspaper’s Monday edition, a column from Valentijn Driessen, a well known Dutch journalist, insists that English football spends too much time using VAR for very marginal offside decisions and not enough time using it for more serious incidents.

As part of the detailed complaints, Manchester City’s Sergio Agüero is dragged into the column. The striker put his hand to the back of Sian Massey-Ellis’ neck after disagreeing with a decision from the official, and for Driessen that it went unpunished is another example of VAR not being used correctly.

He states Agüero displayed a ‘disgusting attitude’ and that it was ‘shocking’ to see the ‘disdain’ on his face.

Driessen believes the Manchester City player’s thoughts were clear: ‘Like: “come here girl, you don’t understand it completely, but you were completely wrong”. A disgusting attitude that went unpunished in the Premier League. The largest football league in the world apparently does not feel the urge to set an example.’ 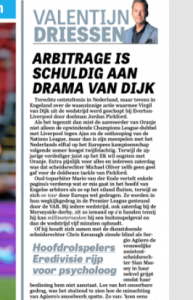 Of course, it’s unlikely this would have been covered in such a way in the Netherlands if it wasn’t for what happened with Van Dijk, and the subsequent long layoff the defender now faces.

However, it’s clear that people believe the Premier League should be setting a better example when it comes to officiating.