Joao Cancelo to Manchester City rumbles on in the Italian media, with more big claims about the player’s move to the Premier League champions.

Last week it was explained Juventus’ Fabio Paratici would be travelling to Manchester early this week to try and get the deal over the line.

Monday saw claims that Paratici was in Madrid, but Tuesday’s Tuttosport says this was a mistake, and he actually stopped in England in an effort to ‘accelerate’ the sale of Cancelo.

At Manchester City they now await the player’s arrival, but things aren’t quite done yet.

Tuttosport believe Cancelo will move to Pep Guardiola’s side for €55-60m, and once again make it clear Danilo won’t be part of the deal.

And there’s the crucial part, they don’t actually say what is happening with Danilo.

Having reporting repeatedly that City want to sell the Brazilian first, there’s no 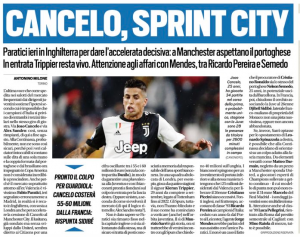 explanation of what’s actually happening on that front. Should there be insistence at the Etihad that Danilo needs to go before Cancelo arrives, then, again, this one isn’t as close as is being suggested.

Manchester United interest is mentioned, but just touched upon in passing, not pushed as anything serious.