A few months ago, we covered reports from Portugal saying Sporting had made a partnership with Manchester City for the acquisition of new players.

And a couple of weeks ago, we covered the Portuguese media breaking the news about the transfer of Félix Correia to the Premier League side.

Now newspaper O Jogo brings an interesting piece saying this move has been ‘the kick off’ of the partnership between the Lions and Citizens.

O Jogo claims that although the deal is worth €7m, Sporting are only getting half of it now. The other €3.5m will be used as a ‘guarantee’ for the time when the Lions want to sign a Manchester City player, or if they go for another target with cooperation from the English side. 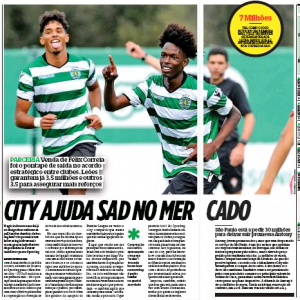 O Jogo claims that the clubs should now cooperate in their scouting work, sharing methods and experiences.

Also, Sporting will be able to sign more expensive players due to the financial help from Manchester City, while the English side get the know-how from the Lions’ famous academy, and also get a priority over players involved in the deals.

Once again, O Jogo claims that this partnership should not involve Bruno Fernandes, because Manchester City have no interest in the midfielder.