Home Europe Manchester City have ‘signed up for race’ – Club said to be...
SHARE

Manchester City have ‘signed up for the race’ to sign Nicolo Zaniolo, and the Premier League club will face a problem, report Tuttosport.

AC Milan and Real Madrid are also keen but Tuttosport, a newspaper based in Turin, believe that Juventus have pushed ahead of the competition for the AS Roma player.

The attacking midfielder is enjoying a breakthrough season at Roma and it will be hard for anyone to snatch him away from the club.

With a contract lasting until June 2023, there’s no pressure in that regard on Roma to sell him and they know parting ways with the 19 year old would bring the wrath of their supporters… which could certainly be explosive.

Tuttosport believe an advantage for Juventus over Manchester City and others is that the footballer liked Juve when he was a child. That’s possible, he’s from near the marble quarries of Massa in Tuscany, and Juve support is nationwide.

A certain Gianluigi Buffon is from the neighbouring town of Carrara.

Tuttosport explain that if Roma don’t qualify for the Champions League then sales will likely be needed, and they put a €60m valuation on the youngster. That’s also a reasonable assumption to make, but it’s been made clear in other Italian publications that 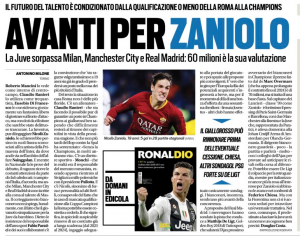 selling Zaniolo would be avoided in comparison to other potential exits.

This would look a difficult one for Manchester City, and they may simply have been dragged in for window dressing.

From Argentina: Club ‘waiting’ for offer so they can ‘close deal with West Ham’

From Argentina: Club ‘waiting’ for offer so they can ‘close deal...

Tottenham ‘have inside track’ on Ligue 1 forward – Summer move...