Pedro Porro’s permanent transfer from Manchester City to Sporting is now looking so obvious that there are people who believe it’s already happened.

This is the case of former Lions player Toñito, who’s has an interview featured in today’s edition of Portuguese newspaper Record.

The Spaniard was a right-back who joined Sporting in 1999 and soon helped them to win a league title after many years. So there are some similarities with Porro, who’s been an important asset in the team who are currently on top of the table.

So Toñito was asked about the Manchester City player, and says he expects the 21-year-old to have a bright future at Sporting.

“He guarantees the right flank for many years, unless they sell him, as Porro is a very desirable player. He also came very hungry, and became an important player in Rúben Amorim’s scheme.” 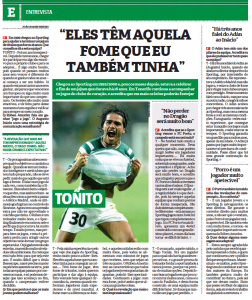 Pedro Porro’s loan from Manchester City is supposed to run until 2022. However, Sporting are expected to trigger the buying clause before many other clubs approach the player for a move.

The Lions should spend €8.5m for the permanent move. That’s less than the €12m paid by Manchester City when taking him out of Girona in 2019, and Pep Guardiola’s side never used him.