Manchester City are continuing to push to sign Barcelona full-back Sergi Roberto this summer, but the Spanish giants continue to resist a sale.

That’s what Sport report today, reviving City’s interest in the defender after weeks of speculation earlier this year.

City boss Pep Guardiola is known to be on the hunt for defensive improvements this summer and has already launched a bid for centre-back Nathan Aké from Bournemouth.

Improvement in either full-back position also seems to be on his wishlist as well, though, and Roberto is a name they have been linked to for some time.

Now, Sport say the defender is their ‘number one desire’ this summer, and they have made it clear they are ‘willing to pay a high valuation’ for him.

Barça are aware of this and are listening, but their priority is to keep hold of Roberto this summer and instead sell Nelson Semedo.

City’s interest in Roberto is nothing new. The newspaper explains that they asked about him at the beginning of the year, but the Coronavirus crisis blocked any deal. 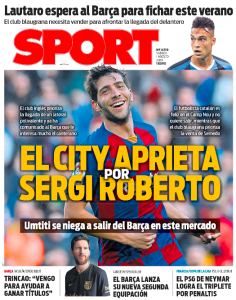 They then reopened negotiations Mendes about a swap deal involving Joao Cancelo, but this was put on hold until Manchester City centre back Eric Garcia was included in the potential deal.

He could now end up as part of a ‘macro-barter’, although they are hopeful at the Etihad that he will sign a new deal.

Roberto, for his part, is more than aware of the interest from Manchester City but is seemingly resistant to moving at the present time.

He’s enjoying a ‘very sweet moment’ professionally, having established himself as a key player for Barcelona over the last year or so. He would thus prefer to stay, but his contract situation is a problem.

That expires in 2022, so he needs a renewal and Barcelona know he will want an improvement, something which is difficult for them to offer as their current wage situation is limited. 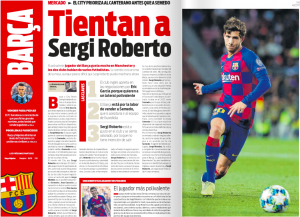 That is something Manchester City can take advantage of as they can ‘improve his wages’ with a ‘definitive’ contract should they wish to.

At the moment Barcelona don’t want to sell, and they are hopeful they can find a suitor for Semedo instead, with his agent Jorge Mendes convinced he can find one.

His ‘main asset’ is Manchester City but he knows they prefer Roberto so convincing them to change their mind won’t be easy.

Whatever happens, Sport state the two clubs will ‘intensify contact’ after the Champions League is concluded.