Manchester City are among the clubs interested in Erling Haaland next summer when his release clause is set to drop to €90m.

That’s according to AS, who cover the race that is quickly developing for the Norwegian star ahead of the summer transfer window.

They explain that ‘the race is on’ and the ‘moves have begun’ as his agent, Mino Raiola, has started his efforts to make a big move happen.

Indeed those efforts started this summer with the tour that he underwent with the player’s father, visiting the biggest clubs in Europe to discuss a transfer.

As you’ll be aware, Haaland’s price is set to drop next summer, and everyone knows that the key is to ‘convince the player and his entourage’ that they are the best option.

All of the ‘big players’ are ‘advancing positions’, particularly Paris Saint Germain, and there have already been talks between Raiola and the Parisian officials.

They’re not the only ones, though, with Real Madrid, Barcelona and Manchester City all positioning themselves as well. 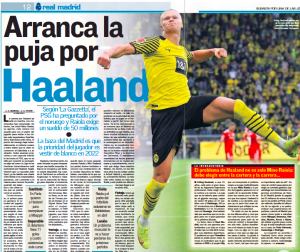 The newspaper say Manchester City are only ‘interested’ at this point, so there’s no comment on talks with his agent, but they do have the advantage of being the team where his father played.

Madrid are felt to have an advantage because of who they are, but it’s not definitive, and Raiola will sit down and present all the options before they make a decision.

The economic aspect will ‘have a lot of weight’, particularly as it’s believed Raiola is asking for much as €50m in wages for his superstar client.

That would presumably put Manchester City at an advantage with their finances in far ruder health than the Spanish giants, given the state of the latter’s finances of late.