We admit that when Correio da Manhã had a story about Jorge Mendes holding ‘decisive meetings’ with Manchester City and Real Madrid for the transfer of João Félix yesterday, we thought we would see some developments today.

Now even though the newspaper brings a new story about the player, they totally ignore the claims about such a meeting.

Correio da Manhã now says the Benfica president Luis Felipe Vieira is focused on getting the €120m fee all in one go, and has been rejecting the bids which include several instalments.

The Eagles are pretty convinced Félix is leaving this summer, since the offers make it a ‘irreversible’ scenario. Now Vieira tries to do his best to get the player on loan for one or two seasons. 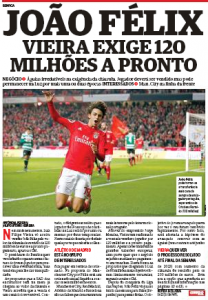 Since Manchester City offered the player a salary of €6m per season, Benfica are afraid of how much would they have to pay in case they do get a loan from the Premier League champions.

The ‘most interested’ clubs are currently said to be Manchester City, Barcelona, Atletico Madrid and Real Madrid. The Colchoneros’ chase has been much pushed by the Spanish press, and that’s why they’ve been getting space in the Portuguese media lately.

Correio da Manhã claims that Vieira wants the transfer sorted before the end of the week. Meanwhile, João Félix is on vacation in Ibiza waiting for news.