There was a time of the year when the Portuguese media was certain that Nuno Mendes would be leaving Sporting on a big transfer this summer before changing their mind, claiming the Lions would like to keep the talented youngster.

Newspaper Correio da Manhã today features a story reporting that the full-back has joined the Lions’ squad following his time off after the Euros, but despite taking part in the pre-season, he should still leave the club in this transfer window.

Manchester City continue to be named as the ‘head’ of the English market, who are labelled as the ‘most interested’ league in getting the youngster.

It’s said that before the Euros, there were several approaches for his transfer, but no bids have arrived in Lisbon so far, although that ‘should change in the coming weeks’ with big signings being confirmed. 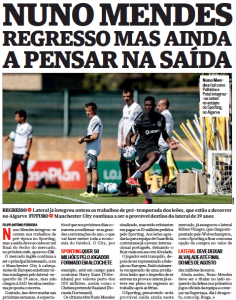 Correio da Manhã says Manchester City have Nuno Mendes ‘signalled’, but ‘are reluctant’ to pay the €50m demanded by Sporting.

The Lions would also like to sell him to the Premier League side now and keep the player for another year back on loan.

Since the Lions have just signed Ruben Vinagre from Wolverhampton Wanderers, they’re now more protected in case Mendes gets to go.

As for the player in all this, he’s said to be ‘calm’ about the situation.