Bayern Munich have until April 30th to use their €21m option to buy Kingsley Coman from Juventus. The 20 year old winger joined Bayern on loan in a 2 season deal from Juve, but without the option being activated he’ll return in the summer.

The Bundesliga club have made it public they intend to keep Coman, but L’Equipe say one slight issue could be the contract Coman himself gets, which may open a small window of opportunity for Manchester City.

Coman is said to be very happy in Germany, settled in a big house on the outskirts of Munich. The Frenchman feels the Bundesliga matches his style and whilst he’s not as important at Bayern Munich as he’d like to be, he’s confident that will come with time. 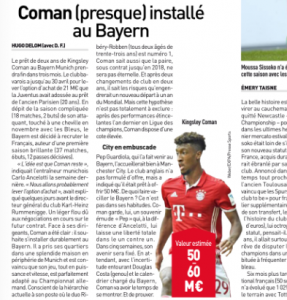 Despite that, L’Equipe say Manchester City are ready to ‘ambush’ the move. No offer has been made but the Premier League club have made it known they’re ready to part with €50m for Coman.

Bayern aren’t expected to wobble, despite the offer of a big and quick profit, but if they do then Coman’s good relationship with Guardiola would help. Coman was given more freedom under Guardiola than he has with Carlo Ancelotti and keeps ‘fond memories’ of the manager.

Club’s Head of Communication explains Wolves deal is ‘stuck’ – Nothing...