Brescia midfielder Sandro Tonali is entering a list of the most wanted youngsters in Europe, and it’s time for Manchester City to be linked to the 19-year-old.

Newspaper Tuttosport today has a story about Juventus’ efforts to sign the player, saying they’ve been trying to buy him since last year.

Brescia are being tough in the negotiations, but the newspaper is confident he can’t be held for much longer, with a departure in the summer of 2020 being very likely.

Now the great competition should mean a big auction, and that’s why Tuttosport believe at least €30m or €40m will be needed to sign him. 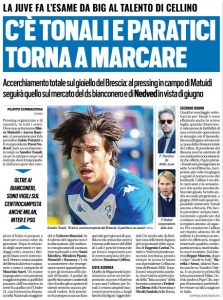 Besides Juventus, Italian giants Inter Milan and Milan are also said to be chasing the player.

Then Tuttosport says Paris Saint Germain and Manchester City are two clubs who they should ‘keep an eye on’. But Tonali is looking to spend at least one more season in Italy, so that would make things more difficult for these two clubs.

It’s reported elsewhere in Italy that Manchester United will scout the player again tonight, with no mention of Manchester City joining them.