It’s been a few years since Vincent Kompany has been injury free for five months, but the fortunate current spell could be due to a lack of playing time at Manchester City this season.

He’s started in six games in all competitions, which includes two appearances in the Carabao Cup and one in the Champions League, with Pep Guardiola preferring John Stones and Aymeric Laporte as his first choice centre-backs.

Belgian newspaper Het Nieuwsblad claims he has new ‘worries’, which is down to the sporting side of things with his current employers.

The centre-back will turn 33 next April and his contract will run down after this season. The report mentions he secretly hopes to extend his career for three more years, but the ‘big question’ is at which club?

Since he has not featured regularly under Guardiola this term, it could have an impact on his future at Manchester City, even though the former Barcelona manager had earlier expressed his desire to keep Kompany for one more season.

His limited playing time has had no impact on his career with Belgium as the minutes he is getting with the Premier League champions are sufficient for him to be in rhythm for international fixtures. 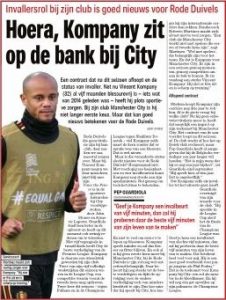 If Kompany decides to leave City, he may not be missed on the pitch, but his leadership qualities in the dressing room and on the training ground is something that the English club could miss out on with his exit.

The defender’s future could depend on the length of deal offered at his current club, if at all, and what is available elsewhere .