New Manchester City signing Ferran Torres has hit out at his former club and their attempts to ‘tarnish’ his image.

The winger completed a move to Manchester City yesterday, bringing an end to months of speculation about his future in Valencia.

The highly-rated youngster has been linked with a move away from his boyhood club for some time, having entered the final year of his contract this summer.

His failure to sign a new deal, despite one being offered, has seen him receive plenty of criticism in the Spanish press, particularly from newspapers based in Valencia.

Indeed, his switch to Manchester City has seen several angry responses from journalists, who have all criticised him for not helping Valencia to get a more significant fee.

Torres, though, has had enough and says the same people criticising him are those who said he would never be good enough.

“Look. When the club made the decision to sign me to the first team, without me forcing anything, I began to receive pressure and criticism to reject it,” he told Marca.

“And not only me. They also wanted to harm and discredit MY representatives and my family. Even though, fortunately, it was only a few means. 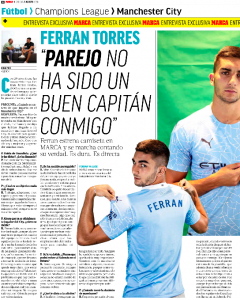 “The same people who now campaign against me said that we were wrong and that I would fail, something that hurt me a lot when I was only 17.

“Just as I say that, I have to recognise that many other media and journalists have always treated me with love and respect.

“Even now that there are club employees working to tarnish my image.”

A large part of the criticism aimed at Torres has been over his failure to sign a new deal at the club given his contract was expiring this summer.

That left Valencia in something of a weak negotiating position as they knew they had to sell this summer to avoid losing him on a free next year.

Manchester City certainly took advantage of that, making it clear they would negotiate with the youngster from January should they fail to get a deal done this summer.

Some feel that Torres is to blame for Valencia missing out, but he insists he always wanted to sign a new deal and made his terms clear to the Spanish club.

“Yes, of course (I saw myself renewing). When César entered the club there were many meetings,” he said.

“To buy me back, as my agent told him, we asked that at least two of the three conditions we set be met… But none of them were met.

“One is that you get Peter Lim involved in my renovation, to show me that I was important to the club.

“Another was to be captain, which was my dream because I had seen how other clubs had done that with the young people.

“And the third was to be among the highest-paid players in the squad. They were two out of three… And none of them came to fruition.” 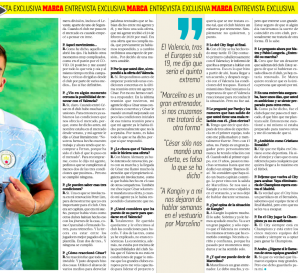 Amid those failed negotiations over a new deal, Torres found himself the focal point of much of the speculation about his future.

The focus, it seemed, was mainly on his failure to agree on a new deal, with numerous claims that he had even ignored the club’s attempts to sort out the issue.

This, though, is something he also disputes, insisting anyone saying otherwise is a lie that is being peddled by Valencia.

“His reaction (César’s) was that everything was unworkable,” he added.

“And just after he did two things: He used the loudspeaker of several media to reveal textual words that have been said between my agent and him.

“He also made me a single offer, which my agent received on February 24, 2020, by mail. It was an offer that did not fulfil anything.

“In the last meeting they had, my agent told César some concrete conditions and César sent him a mail, improving a little bit the initial conditions of that same meeting, even though my agent already told him personally that he did not accept it.

“Therefore, everything that has been said is false because he did respond.”