Home Europe Manchester City player struggling to get into country, bit of a mess,...
SHARE

Olarenwaju ‘Larry’ Kayode is facing a major problem, he’s not been allowed to travel back to Spain after a Christmas break.

Owned by Manchester City and on loan at FC Girona, Kayode went back to his native Nigeria for a Christmas break, and ‘bureaucratic problems’ mean he hasn’t been able to return to Spain.

Spanish newspaper Marca call the situation an ‘enigma’, and it does seem to be quite strange, especially without a clear explanation from either club involved. If the Manchester City player was fine to play in Spain for the first half of the season, it seems odd there’s now an issue. 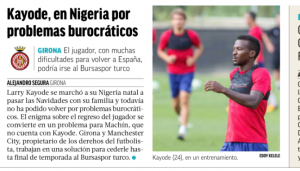 Bursaspor until the end of the current season, which would suggest it’s not simply a minor paperwork problem going on here.

It must be a difficult time for the 24 year old, and Manchester City’s liaison department will surely be working hard to make a messy situation better.