A little snippet from Xavier Bosch in Wednesday’s Mundo Deportivo reports on what happened with Ilkay Gundogan to Barcelona, and why the German international ended up at Manchester City instead.

Gundogan is said to have passed a medical with Barcelona, despite suffering from back problems. To not see speculation go crazy, the medical was held outside of Catalonia.

The midfielder was ‘crazy’ for the move and even willing to spend 6 months without playing, given Barcelona’s registration ban at the time.

An agreement was reached with Borussia Dortmund for a fee of €20m, and everything was set to go through. 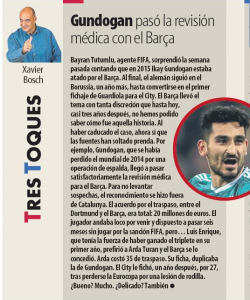 But then Luis Enrique decided he didn’t want the player, and given he’d just won the treble, the manager’s position was very strong. Instead Enrique wanted Arda Turdan from Atletico Madrid, and Barca signed him for €35m.

And then Gundogan signed for Manchester City the following summer.

Bosch accepts the midfielder has proven himself under Pep Guardiola, but still says he’s ‘delicate’ and doesn’t go as far to point out what a huge mistake Enrique made.