Home Europe Manchester City player has been ‘offered’ to another club – Transfer under...
SHARE

On Friday afternoon, we covered claims from Portugal that Ruben Dias was set to sign for Manchester City. It wasn’t presented as a rumour, but rather a done deal, with the Portuguese media catching everyone cold with the scoop.

Nicolas Otamendi was set to go the other way, and it was all part of Pep Guardiola’s efforts to tweak his defence before the window closes. The Argentine may not be the last one to leave the Etihad, and Sunday’s edition of Mundo Deportivo says Oleksandr Zinchenko has been offered to Barcelona.

Sources at the Catalan club have informed the newspaper of this, and it’s stated the Manchester City player is under consideration right now, one of a number of players Barcelona have as options should they enter the market in the coming days.

It’s made clear there’s nothing serious, and Zinchenko would only become a concrete possibility if Junior Firpo is sold. Even then, Juan Miranda, currently with Barca’s B team, may be preferred. 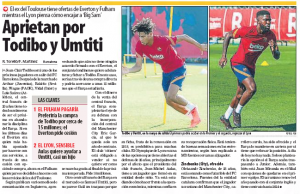 Mundo also touch upon Eric Garcia and say Ronald Koeman’s side will move for him once they finally find a home for Jean-Clair Todibo.

Fulham are the latest in a long line of clubs being linked with the Frenchman.