Manchester City right-back Pedro Porro is landing in Lisbon today to complete his move to Sporting, according to local reports.

Newspaper A Bola says the player should be visiting the Lions’ facilities this afternoon, and will soon have his medical ahead of the move.

He should later sort the final details of his contract, and sign a two-year deal with Sporting on Friday or Saturday.

Pedro Porro is joining the Lions on a two-year loan deal, and the Lisbon side managed to include an option to buy him in the agreement. 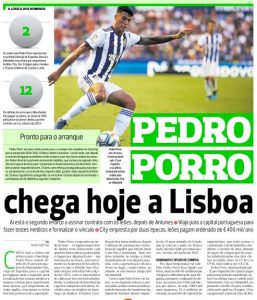 A Bola says Sporting will be pay Porro’s full salary, which is €400k net per season, where they’ll spend €800k gross.

It’s also claimed that the buying option will be between €7m and €9m, and ‘everything indicates’ it’s actually €8.5m.

Manchester City spent €12m to sign Pedro Porro from Girona last summer. He was never used by Pep Guardiola, since he was immediately sent to Real Valladolid on a one-year loan deal. Now this buying option for Sporting indicates he may never return to England.