Manchester City defender Nicolas Otamendi is ‘very close’ to moving back to Porto, according to claims from Portugal today.

Newspaper Correio da Manhã says that in the past few hours, the player could convince the Premier League side about his wish of returning to the Dragons. The outlet reports the English club accept to loan him out and still pay for half of his wages, which are €7m gross per season.

Now it’s claimed that Otamendi should land in Porto ‘in the coming days’ so he can have his medical and sign a contract with the club. 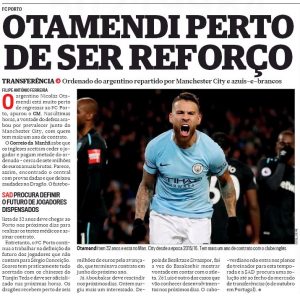 Nicolas Otamendi still has two more years of contract with Manchester City, but his departure has been expected for a while now, especially with the arrival of Nathan Aké from Bournemouth.

Pep Guardiola is also looking to sign another central defender.

The Argentine international was heavily linked with a return to Valencia in the past few days, but it seems going back to Portugal is now edging closer.