There are some lovely words in Tuesday’s edition of De Telegraaf about Phil Foden, which should be able to brighten your day.

In a big article, the Dutch newspaper call the 20-year-old ‘The English rose’, and go on to say he stands out in a ‘bouquet full of wild flowers’, and: ‘Is that little lightweight the British answer to Lionel Messi, Cristiano Ronaldo and Kylian Mbappé?’

De Telegraaf insist the player is gaining many more fans each week and to add another huge dollop of praise, they say: ‘Foden casts a spell like Stanley Matthews did, dribbles like George Best in his glory years and scores like Kevin Keegan did on the English fields.’

If there had been concern Foden isn’t getting enough attention outside of the UK, that should ease it.

Robin van Persie, known in English football for his spells with Arsenal and Manchester United, is presented as being a huge supporter of Foden, and another Dutch legend, Ruud Gullit, joins in the chorus of praise.

Gullit believes a big part of the youngster’s success is down to working with Pep Guardiola, with the Manchester City manager thought to be hugely suitable for getting the most out of Foden’s talent. 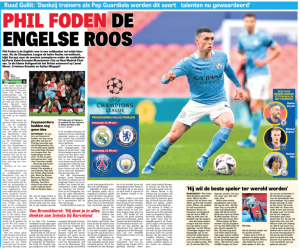 De Telegraaf quote Gullit as saying: “Pep was very careful with him. He went in and out of the team. He has the best level around him that you can think of. Then he will grow, eh.

“Foden is a very un-English player. In the past, these types of types were never given space, especially with English coaches. The English wanted guys in their Premier League team, big and strong.”