Chelsea have been thrown into the pot too, just like they are with most good players possibly available in Italy, and Sunday’s edition of Tuttosport talks everything up.

Manchester City are said to be ‘persistent and insistent’ in their attempts for the player, but no offer has actually been made yet.

Tuttosport report the situation is ‘moving towards an offer’ and they believe it will be a blockbuster one. For a while the Turin media have priced a potential Pjanic sale at €80m, but now it’s stated an offer from England would be ‘very close to €100m’.

That sounds over the top for the 28 year old and it seems Juventus and their local media expect Premier League clubs to pay for the signing of Cristiano Ronaldo. Daniele Rugani’s price has also gone up over the past week. 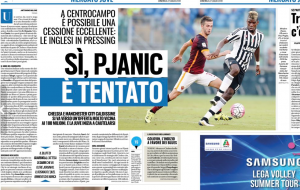 Along with Manchester City and Chelsea, Barcelona and PSG are said to be interested but it must be said the media closest to the latter two hasn’t really been covering it.

Juve seem to be putting a ‘not for sale’ face on, whilst at the same hoping Pep Guardiola arrives with €100m.