L’Equipe has a small article on Tuesday covering Lyon’s stance over Tanguy Ndombele.

The French newspaper explain that Lyon are prepared to sell the midfielder this summer, feeling he’s currently their player with the highest market value.

PSG have long been linked and it’s stated Manchester City and Juventus are also both ‘particularly interested’ in signing the player during the next window.

Lyon are so prepared that they’ve already been looking at potential replacements. One idea could be to sign an experienced player and also a young option who would grow into the role.

For the latter idea, Djibril Sow of Young Boys has been identified, and it’s explained Lyon would face competition from German clubs for the 22 year old.

There’s no indication from L’Equipe over the level of transfer fee Manchester City and others would be asked for should they make a concrete move for 22 year old Ndombele. 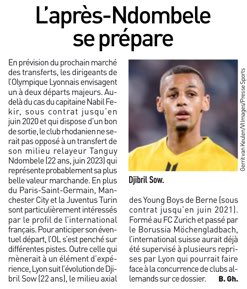 Lyon president Jean-Michel Aulas has made it clear he wouldn’t rule out selling to PSG, probably feeling Lyon can’t get to their level in Ligue 1 anyway so may as well invite everyone interested to the auction.

With doubt over the future of Ilkay Gundogan, and Fernandinho turning 34 years of age next month, midfield is certainly a concern for Manchester City and Pep Guardiola this summer.