It’s easy for young footballers to find themselves lost on continuous loans and even some of those who go on to do well at a high level find it difficult to perform well on their temporary assignments.

Patrick Roberts is not one of these footballers.

The 21 year old impressed at Celtic. So much so there was a genuine disappointment that he didn’t return to the Scottish Premiership club for the current season.

Instead, Manchester City sent him to Girona, and initially that didn’t look the best of moves. Struggling to get game time, Roberts was having to live on small substitute appearances, and there wasn’t a great deal of excitement at the club about the English youngster.

Injury to Portu changed that.

Two starts and good performances have led to rave reviews in the Spanish media. Roberts got the majority of the game at the weekend as Girona drew 1-1 at home to Atletico Madrid.

Marca describe him as a ‘marvel’ and tell people to ‘remember the name’… because Atletico won’t forget it. The ‘relief’ that Portu didn’t start the match soon turned into worry over Roberts. 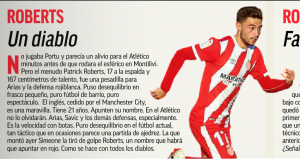 The Spanish newspaper says he gave Santiago Arias and the rest of Atletico’s defence a ‘nightmare’.

Portu is now fit again, he came on for the last 24 minutes, and it would be a shame if Roberts is pushed back into the shadows.