Bayer Leverkusen youngster Benjamin Henrichs keeps attracting eyes from around Europe. Italian newspaper Tuttosport had a feature about the player this weekend, claiming he’ll be fought over in coming transfer windows.

Although Tuttosport generally highlights youngsters who Juventus are interested in, it’s not the case this time. They say it’s Bayern Munich who want him to be Philip Lahm’s successor, and the German side should be battling with Manchester City, who also have a strong interest.

Henrichs has been linked to Manchester City for a few months now, especially after it was reported that Pep Guardiola would have sent scouts to watch him closely. 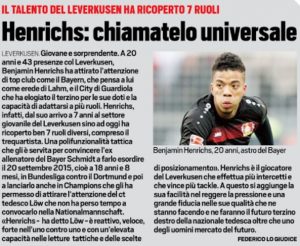 Despite spending most of the season playing as a right-back for Leverkusen, then 20-year-old has already shown he can play at left-back and in several midfield positions as well.

Just like German paper Sport Bild did last year, they do not mention how much Henrichs would cost. The player has a contract until 2020, and although Transfermarkt consider he’s worth €10m, he’d certainly be sold for much more due to this heavy competition.

Given the player’s age and versatility, Pep Guardiola being interested would be no surprise.