Thiago Almada’s transfer from Velez Sarsfield to Manchester City may have collapsed now, but perhaps it doesn’t mean it can’t happen in the future.

Sporting, who were expecting to get the winger on loan, are now going for other options. And as reported by Record today, they could get another Velez player, this time Lucas Robertone.

Regarding Almada, they say the deal collapsed due to Manchester City, since the club only offered €12m and refused to pay the €16m release clause.

But since his contract expires soon, it’s said the Premier League side could go back and sign him for free in January. Then they would loan him to Sporting. 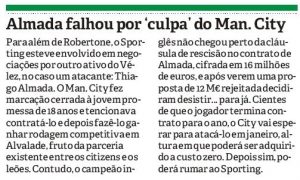 When speaking to the Argentine press, a Manchester City official really said they wouldn’t be spending much money on a player who would be free in ‘less than an year’.

Perhaps this is a plan which makes sense, although it’s still not clear when Almada’s contract exactly expires. Transfermarkt says it’s in the summer of 2021, but that would go against all the claims.