Manchester City’s chances of signing Lionel Messi would be ‘slightly more complicated’ if they were to have to pair him with Neymar too.

That’s according to L’Equipe today, who explain that City are the only other ‘potential candidate’ than Paris Saint Germain to reunite the former Barcelona duo.

Neymar dropped a bombshell after PSG’s win over Manchester United in the Champions League this week, telling reporters that he wanted to play with Messi again next season.

That started the rumour mill swirling, with it clear that either Messi would have to be heading to Paris or Neymar back to Barcelona for that to happen.

The more likely scenario is the former given the state of the Catalan club’s finances and L’Equipe explore that scenario today.

They explain that Neymar was sending a ‘first message’ to PSG owners with his comments on Messi, making it clear that if it is possible for them to sign Messi, then they should start the process sooner rather than later.

That’s because the Argentine is free to negotiate a free transfer from January, with his contract at Barcelona expiring next summer.

From a Financial Fair Play perspective that is ‘not insignificant’ to PSG but the Argentine’s wages, which are estimated at €80m gross, are.

At the moment it’s debatable whether they could afford them, given the club already lost €100m in the 2019/20 season and are preparing to lose more than €150m this season.

FFP ‘does not authorise’ losses of more than €30m over three years and so a deal is hard to get done in the current climate.

UEFA are likely to relax those rules given the COVID-19 pandemic, but clubs will not be given a ‘carte blanche’ and so if PSG want Messi then they will need to part with a few high profile players.

That’s not an issue for Neymar personally, with the Brazilian having made it clear that he thinks the group needs a major overhaul if they are to ever have a chance of winning the Champions League. 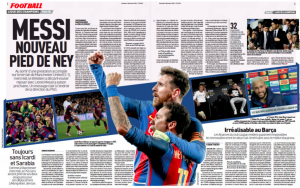 At 29-years-old he is keen to keep adding trophies to his collection and Messi would naturally help in that aim, which is why he tried to get him to the club last summer and is continuing that effort for next summer too.

The indication is that if he can make it happen, he will extend his stay with the club, with his current contract set to enter its final year from next summer and PSG pushing for a renewal.

If not he would have to try and reunite with Messi elsewhere and that is unlikely to be at the Camp Nou, given they are ‘already struggling to pay the agent commissions they owe’.

Indeed, it would take a club with a ‘financial strength’ comparable to that of PSG, and that would be Manchester City.

They, of course, tried to sign Messi in the summer too and would be the only ‘potential candidate’ who could reunite the pair.

However, L’Equipe state that signing the Argentinian plus the Brazilian would become a ‘slightly more complicated equation financially’, even for a club as powerful as City.

That leaves Paris as the only real solution for the pair, although we’re sure those in charge at the Etihad could make things happen if they so wished it.