Argentine starlet Thiago Almada continues to get some huge attention from the Portuguese press, where the stories about him won’t stop showing up.

Sporting are hopeful that Manchester City can find a deal with Velez Sarsfield and then send the player on a loan spell in Lisbon.

Newspaper Record has a story today saying the negotiations between the English and the Argentine clubs continue.

Manchester City reportedly had a first bid rejected, but since Velez are struggling to increase the player’s release clause from €16m to €25m, the Premier League side still have a good chance to get him on a cheap deal. 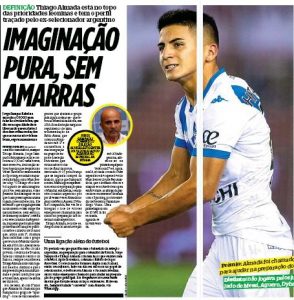 Newspaper O Jogo also brings a big story about the winger today. And even though they don’t bring many updates on the negotiations, they have a quite interesting interview.

O Jogo spoke to the Santos manager Jorge Sampaoli, who last year managed Argentina in the World Cup and had Almada as one of the youngsters who trained with the squad.

Sampaoli isn’t a big fan of speaking to the press, but still took some of his time to talk about the youngster.

“Thiago sees football from a free imagination, without ties, and this allows him to distinguish himself from those who are stuck only to a pre-established play.” Jorge Sampaoli told O Jogo. “He understands what the play needs at that moment and this comes naturally to him, without effort, spontaneously.”