Kai Havertz may just about edge Jadon Sancho aside to be the big Bundesligsa transfer story ahead of the summer window.

The Bayer Leverkusen player has been impressing since breaking through for his club and it’s no surprise there’s widespread interest in signing him.

This week’s edition of SportBild reports the youngster, or at least his representatives, is holding negotiations with no less than seven clubs.

Manchester City are among the group and joining them are neighbours Manchester United, Liverpool, Real Madrid, Chelsea, Barcelona and Bayern Munich.

Pep Guardiola’s future is key in the matter, with SportBild reporting the manager’s uncertain (as they have it) future means City are lagging behind others. Havertz wants to be sure of his next step, and the German magazine insists that despite claims otherwise, Guardiola could still leave the Etihad in the summer.

Another black mark for Manchester City is the competition they currently have in midfield, 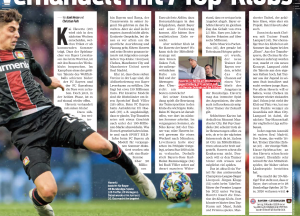 with the 20 year old not wanting to go and sit on the bench somewhere.

An asking price is put at around €130m, however, it’s suggested a chunk of that could be in bonus payments.