For months, Jordi Alba and those who represent the player have been dropping endless hints about a new contract at Barcelona.

There’s been straightforward quotes from the player, like at the weekend, and stories fed through to the Catalan media about potential interest from other clubs, with Manchester United the Premier League team thrown in most often.

But despite all the talk, despite all the public, and likely private, pressure being put on Barcelona, they still haven’t offered a new contract. It could be that they’re simply trying to delay as long as possible so as not to apply more weight to their already huge wage bill, or maybe they’re in-turn trying to give a hint to the player.

This all leads to transfer rumours. And Monday’s edition of Tuttosport sets up a tussle between Juventus and Manchester City.

As far as Tuttosport are concerned, Juve are interested in pretty much everyone, and one of the Manchester clubs is usually dragged in as competition.

Pep Guardiola’s side are described as being ‘much more than vigilant’ over the potential signing, and the Turin newspaper believe a transfer, anywhere, is increasingly likely. 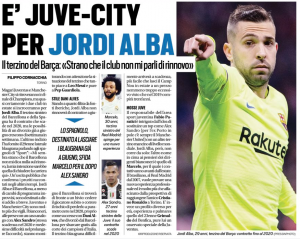 Alba will be 30 years of age at the end of the season, by which time he’ll have a year left on his Barcelona deal. If there’s no renewal attempt, and if Barca truly want him out, then a transfer wouldn’t be too expensive.

Manchester City may take a look at the situation then, depending on their own stance at left back come the summer.