All the outlets claim the clubs should now have a partnership for the signing of new players from abroad, as well as the sharing of information between them.

Now there’s only one newspaper who could reveal a new name who should be part of these new plans, and that’s A Bola. They say Abdülkadir Ömür from Trabzonspor is a name on the table.

As we covered earlier today, Manchester City had a bid rejected for São Paulo wonderkid Antony. Now A Bola claims that Omur is an alternative suggested by the English side. 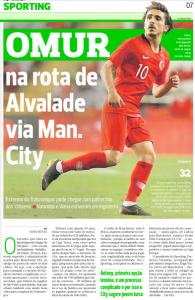 Omue would be bought by Manchester City and then loaned out to Sporting.

The Citizens see the Lions as the ‘ideal’ club for the player to progress, since he would be part of a competitive league and also play in Europe.

A Bola doesn’t know how much Omur could cost. They recall that when linked to Sporting by the Turkish press, his price was said to be €30m. Then when linked to Benfica it dropped to €20m.