The right-back is now available on a free transfer and on July 13th, Sport reported that Pep Guardiola views the Brazil international as an ‘ideal’ signing for his side this summer.

Juventus’ Joao Cancelo has been heavily linked with the domestic treble winners, but the Sport believe they’re not willing meet his asking price.

In addition to this, City will have to offload Danilo before signing Cancelo or any other player.

Friday’s edition of Sport claims Alves, who is on a holiday after the 2019 Copa America, has still not decided on where he will play next season.

It’s claimed that Juventus and City seem to be the ‘more feasible’ destinations for the defender.

The Turin club’s chances of signing the ex-Barcelona star depends on whether or not Cancelo will move to the Etihad. Guardiola’s side will move for Alves if they fail to land the Juve player. 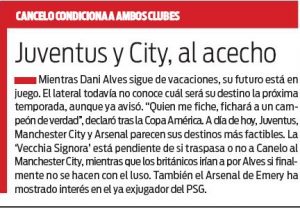 Manchester City have an advantage as they could end their interest in Cancelo and sign Alves on a free transfer, forcing Juve to continue with the Portuguese fullback.