Manchester City goalkeeper Claudio Bravo could move to the MLS when his deal at the Etihad expires this summer.

The 36-year-old has recently found himself back in the Manchester City first-team as an injury to number one Ederson forced Pep Guardiola to turn to his number two.

There is little to no chance of him replacing the Brazilian when he is fully fit, though, with the Chilean very-much the backup at the club these days.

The suggestion has been he will be moving on when his contract expires next summer, and it seems a move to America may be on the cards.

According to El Mercurio, Bravo is ‘tempted’ by the move across the Atlantic Ocean to see out his career and already has three offers to move there. 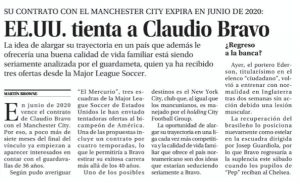 The most tempting is from New York City, who just so happen to be owned by the City Group, who have proposed a four-year deal that would see him extend his career beyond his 40th birthday.

That’s presumably much better than staying at Manchester City, which doesn’t seem to be an option anyway, or becoming a free agent and looking for a move elsewhere.

Club in talks with Tottenham player for summer transfer – Trying...

Southampton still in hunt for Ligue 1 player as competition makes...

Club believe deal for Chelsea player ‘is within reach’ for less...