Manchester City and PSG are leading the race to sign Real Madrid defender Pepe, according to claims in the Spanish media. The Portugal international will be a free agent in the summer when his contract expires with the Spanish giants.

Marca have claimed Manchester City and PSG are the two best placed clubs to land Pepe, with both parties contacting his agent Jorge Mendes. It’s been reported the two clubs have offered the Real Madrid star a two year contract, which is what the player is seeking. 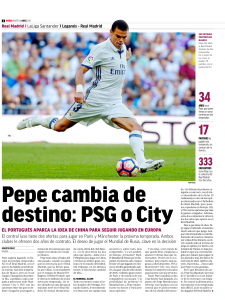 Pepe has also been offered the chance to head to China, and the central defender would earn more money than what’s being offered by Manchester City and PSG.

However, the defender has been told by Portugal national team coach Fernando Santos to guarantee himself a place in next year’s World Cup in Russia he still needs to be playing in a competitive league.

Joining either Manchester City or PSG would meet this criteria, but a move to a Chinese club could jeopardise his place in the Portugal squad.

Real Madrid haven’t been inclined to offer a two year deal but should Pepe finish the season in good shape, and not commit himself to anyone before then, a stay at Los Blancos wouldn’t be a surprise.