It’s only been a few months since Manchester City loaned Pedro Porro to Sporting, and the chances of a permanent move are already being considered by the Portuguese press.

Newspaper Record features a story today in which they highlight how good the right-back has been this season so far.

They call him the ‘king of shots’, as Porro is the Sporting player with most attempts in the first three games of the Portuguese league.

Porro is considered to be one of the best Sporting players this season, and despite being only 21-years-of-age, he’s already guaranteed a place in the Lions’ starting XI. 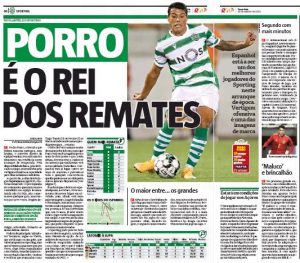 That’s why Record writes that Sporting may have done ‘excellent business’ when signing him on a two-year loan deal with an option to buy from Manchester City for only €8.5m.

There’s obviously no information on the Lions’ intention yet, since they have until 2022 to take a decision on his future. But things are looking good for Porro in Lisbon.