If something is already well-known and many articles have been written about it, we’re not sure how it can be discreet, but that’s how Manchester City’s scouting of Fabián Ruiz is described by Corriere dello Sport on Thursday.

The Premier League champions’ interest in the Spaniard has been documented for the past few weeks now, as they eventually will need some more depth in their midfield, and the former Betis man is apparently on Pep Guardiola’s list.

We already covered a bit about this earlier this week, and Napoli were starting to get worried as they prepared a new contract for their star man, one that would see a release clause of at least €100m (or €120m depending on the reports) inserted in the deal.

Regarding this interest, Corriere dello Sport state City are ‘lined up’, and are ‘discreetly observing, ready to then raid’. 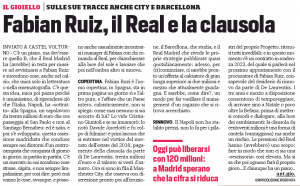 They join Real Madrid and Barcelona in this endeavour, which has also been well covered by various outlets, with the former of the two seemingly the more insistent.

We’ve now had a couple of different sources claiming this interest from Manchester City, so there’s clearly something there, but whether this leads to movement in January, we highly doubt that.

If they do try and sign Fábian Ruiz, it’s the kind of deal that would likely be saved for the summer when clubs are less reluctant to part ways with their stars as they know they have more time to replace them.