Manchester City were apparently involved in some intense negotiations last night, even though the deal won’t mean the arrival or departure of a fancy player for the club.

City fans probably remember Bruno Zuculini. The Argentine midfielder was signed from Racing in 2014 on a €2.5m deal and only had a single appearance for the club. Until being sold last summer, he had several loan spells, at clubs such as Cordoba, Middlesbrough, AEK, Rayo Vallecano and Hellas Verona.

The latest club managed to get him on a free transfer, but Manchester City kept 40% of his economic rights. And that’s the reason why they’ve just made some money with him.

As reported by Argentine newspaper Olé today, Buenos Aires club River Plate closed the signing of the player from Hellas Verona last night, but things became much more complicated than they expected. 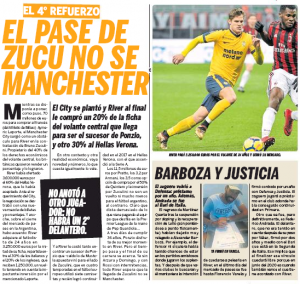 River’s offer of €3.6m for Hellas Verona’s 60% share of the player had already been accepted, and everything looked done, as that was enough to take the player to Argentina. But that’s when Manchester City showed up.

According to the newspaper, the Premier League side showed their intention to sell a percentage as well, and even though River Plate were not obligated to pay, they found it better to find a deal to avoid any problems.

The agreement was done late at night, just before the transfer window closed. River Plate ended up paying €3.25m for 50% of Zuculini’s rights, being 30% from Hellas Verona and 20% from Manchester City.

In other words, Manchester City are receiving €1.25m, and still own 20% of the player. Hellas Verona still have 30%, making his rights completely sliced.

Now, this kind of ownership system isn’t actually allowed, so for all of Olé’s reporting, things must be slightly different, probably with City being entitled to a percentage of the transfer rather than continuing to own part of the player.